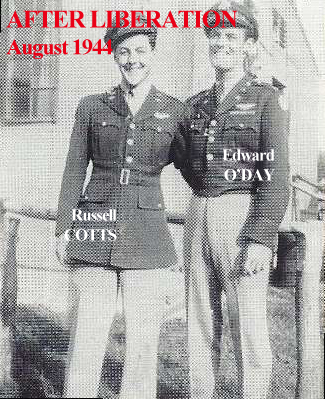 THE LONG WALK BACK

On August 4, 1944, Russell Cotts was shot down over France.
His adventure began with take-off from an airbase in England on a mission to bomb a synthetic oil refinery in Saint Germain en Laye near Paris.
He was twenty. This was his third and last mission as a co-pilot before he would as a pilot with his own crew. This crew of ten men of the 385th Bombardment Group from Great Ashfield, England would never complete their mission.

The airplane was hit be ground flak and caught fire before reaching the target.
“It was five o’clock on a beautiful summer afternoon when we opened our bomb bay doors and began our bomb run. Soon after we experienced heavy anti-aircraft fire. We felt flak striking the airplane which filled up with smoke. A fire started in the left wing and flames were lapping up into the bomb bay,” Cotts recalls.

“We slid out of the formation and the pilot ordered the bombardier to salve the bombs to prevent an explosion in the airplane. The pilot, 1st LT. Newcomer, a veteran of thirty-two mission, jumped from his seat to see what he could do about putting out the fire. I was left to fly the aircraft. The plane had lost its left two engines and it was impossible to feather the propeller on number one engine. The propeller continued to windmill (turn without power), which was a drag on the plane.

The pilot was trying to fight the fire but lack of oxygen caused him to pass out and he fell to the floor of the plane. We were at twenty-five thousand feet and he did not last long without oxygen. I ordered the navigator to bring a walk-around oxygen bottle to him. He connected it to the pilot’s mask and soon revived. There was tremendous tension and excitement in the airplane while the crew fought to bring the fire under control.
The rest of the bombing group had gone on to bomb the primary target and we were alone. I had my hands full trying to hold the airplane level while the navigator plotted a course back to England avoiding the known flak areas in France that were noted on the aerial maps we had on the plane. The plane constantly losing altitude and it became doubtful that we would ever make the English Channel.

I noticed the pilot and the top-turret gunner were not in the cockpit area so I called the bombardier on the radio to told him to check the airplane and see where they were. The plane was still full of smoke and he could not see into the fuselage without going to the back of the airplane. He came back after a tour of the entire airplane and reported that seven men had bailed out leaving the navigator, the bombardier, and myself.

We were continuing to lose altitude and I gave the order to bail out the navigator and the bombardier came up into the cockpit and bailed out through the open bomb bay doors. After they have gone, I set the trim tabs to hold the plane level as possible and went to the bomb bay and bailed out myself.

I was falling on my back and could not see the ground. I wanted to delay opening my chute as long as possible. My chances of evading capture depended on not being visible from the ground very long. I could see the airplane gradually going into a steep spiral to my left. As it gained speed going down, the engine on the right wing began to scream with their increased revolutions. It was about a quarter of a mile away and slightly above me when it blew up with a tremendous explosion-flame, smoke, and burning parts fell to the earth along with me.

I finally jerked myself around, got a look at the ground, and estimated I was about 3000 feet above it. I pulled the ripcord and my parachute opened. I discovered I was coming down over a lake. There was a recreation spot or resort on one side of the lake. I could see many people and recognised the green uniforms of German soldiers.

I was afraid I was going ton wind up in the water and tried to kick my heavy flying boots off but could not do it while hanging in the parachute. Then I began to drift over to the left side of the lake and luckily I drifted over a wooded area and came down in some trees. My parachute caught in the branches and I was suspended about ten or fifteen feet above ground. I kept jerking on the lines of the chute and they finally let go and I fell to the ground.

I looked at my watch and it was 5:30PM. I pulled the chute together, rolled it into a ball and hid it under some leaves in the forest. There was a sort of path or country lane running through this woods and I concealed myself in a nearby ditch. I could hear people and vehicles in the distance but they never got to where I was.

About an hour later, two French children, about ten or twelve years old, came walking down the road. They had been picking berries in the woods. I had an escape kit with a French-English dictionary, escape maps, French money, and other items to assist airmen in escape and evasion tactics. I was in my flying uniform and I approached them, opened the book, and pointed to where it read, ‘I am an American” in French and English. Iasked them for help. They pointed to my watch indicating they would return later and left. I concealed myself again but in a different area from where I had contacted them. If they came back with Germans, at least I would not where they had left me.

Two French civilians returned several hours later and I left my hiding place and approached them. They were members of the French Underground. They took me to a small isolated shed like farm building that had a sort of attic loft. They put me up in the attic with a bottle of wine and a loaf of black bread and told me to stay there for the night.

In the morning there were German ME-109 planes taking off over this shed at such a low elevation, I thought I could touch them.

The French Underground people returned and we started a trip through France which led to my return to the American forces. These people gave me a civilian suit and shoes. They also disposed of my uniform. I then gave them the money from my escape kit and we began to walk to a city called Rambouillet. We could walk during the day along the back roads and I was passed along from one underground group to another. We reached Rambouillet and I stayed for three days with a family called Le Febvre. Mrs Le Febvre and her son, Claude, were in the French Underground and her husband was in Germany in prison. He had been there since the fall of France. The Le Febvre home had a stone wall around the back yard and we stayed in house or in the yard for the three days. It was at this house that I met my bombardier and navigator who had also contacted the underground and were brought to that place. An American fighter pilot was also there with us. Whild we were at Rambouillet, the 8th American Airfoce bombed the city’s railroad station. We could see the airplanes and hear the bombing and it was terrifying to hear the explosions and the sound of fighter planes diving on the target.

One morning, the French Underground people said I was leaving and I never saw the bombardier or the navigator again.

We then began a series of moves back to Paris and round up taking an inter-urban train into the city. I stayed one night in Paris and remember seeing the Eiffel Tower on the skyline. We also left Paris on train. I was sitting with my French compatriot and since I could not speak French, I had been warned not to say anything. I was pretending to read newspaper when a passage got up at a stop, took a parcel off the luggage rack over my head, and dropped it on me. He was very apologetic and I recall my apprehension as I sat there and said nothing. We then got back into the countryside and I stayed at a farm for a night. During the night, the German army was retreating through the area and soldiers stopped and asked for bicycles. I was hiding in the hay loft of the barn… The soldiers did not believe that there were no bicycles and I held my breath while they search lower level of the barn several times.

There were always German soldiers around us especially when we walked the streets of Rambouillet and Paris. The greatest strain in the evasion attempt was the knowledge that you knew who you were and you felt that it would be easy for the Germans to realise that you were not French civilian. I was scared stiff all the time.

The next day we were again walking through wheat fields heading for the American lines. At one point we passed a Y in the road, took the right fork in the Y, and were walking several hundred yards from the intersection when a German armoured came along. It took the left fork and then suddenly stopped, hurriedly backed up, and came down the right fork where we were walking. I thought this is it. They realised we were escapees and were about to apprehend us ! However, they rode right past us and once again we evaded them.

Eventually we got to a point where the French man that was with me said he could go no farther but that the front was only a few miles away. He told me to continue on this same road and that I was certain to meet the American army. I did so and the next thing I saw was an American ambulance coming down the road. I jumped out in the road in front of it and waved it down. The driver did not want to stop and almost ran me down. I raced up to him and showed him my dog tags. I told him that I was American, a B-17 pilot, and was escaping capture. He told me to get into the front seat of the ambulance and he would take me back to the hospital. There were several very badly wounded French resistance fighters in the back of the ambulance. One of them died later.

After a short ride, we came to a military group which was part of the American 5th Division and I was fortunate to be back in the hands of the Americans.